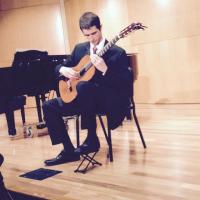 Joe Peters is a pastor of a country church by the name of Grace Bible in Morgantown, WV. His first degree was in Music Education, graduating from WVU in 1988. As a hobby, he enjoys teaching band/music at Morgantown Christian Academy.

Piano has always been his primary instrument; he studied under Herman Godes, and Mayola Martin. He is particularly interested in the great historic hymns of the faith -- songs like "Amazing Grace," "The Old Rugged Cross," and the like because of his faith in Jesus Christ as his Savior. As such, his desire is to glorify his King of Kings with his talent in piano.

Joe had a kidney transplant back in July of 2013, and has a new leash on life, coupled with a surprising addition ... his hands feel better than they have in years. He knows many who are at higher musical proficiency, but he desires to share the musical arrangements that God puts into his heart and to grow in the proficiency. So, now he's enjoying a hobby, with his son and donor, Billy Peters.

Billy developed a knack for classical guitar that has blossomed through the years, especially during his time at Maranatha Baptist University. When Billy was about 15 years old, friends from church purchased him his first real instrument. (His father's "Kay" was pretty well worn.) Billy has developed a talent in arranging through his experience with MBU. He has a burden to write quality sacred music for classical guitar; he looks forward to providing many more titles for the church guitarist. Billy now serves as a pastor at Wausau Bible Church in Wausau, Wisconsin.

Together, they produced their first Christmas CD July of 2015, for which the arrangements are made (and many of which will be available for purchase -- not to mention the free arrangements) by this fall.

They strongly believe music is an emotional language used best in the true worship of God who is Holy. May Jesus Christ be praised!