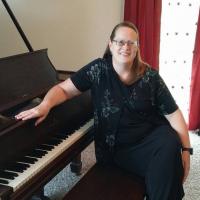 I began piano study at the age of 7. However, after three teachers in three different states and five years in John Thompson Book 1, I was on no one's list of "Most Likely To Succeed At Piano." Thankfully, my parents were willing to persevere and unwilling to consider quitting an option, and by the age of 13, I began to accompany worship and play offertories at church.

I earned my B.A. and M.A. in Piano Performance and Pedagogy from Pensacola Christian College where I studied piano with Daniel Nagy and Daisy de Luca Jaffe. Following graduate school, I taught music in two private schools before transitioning to teaching private piano lessons in my own studio.

I didn't begin composing seriously until my mid-twenties. The first surviving composition (i.e. the first one that didn't get pitched in the trash can!) was a vocal solo inspired by Omar Khayyam's Rubaiyat titled "Does the Hand of the Potter Shake?" This was soon followed by many vocal, choral and handbell arrangements and a cantata titled Face to Face with Calvary that was performed at Faith Baptist Church in Sellersville, PA. Not too long after this, a cello followed me home and demanded some attention. Many of my string arrangements from this time, including the sacred cello quartets, were the result of requests from my cello teacher.

I'd love to hear from you if you have any comments, suggestions or requests!